What Is The Golden Ratio In Design?

What Is The Golden Ratio In Design? Over time, we’ve developed a more comprehensive understanding of what works and what doesn’t work in design. Whether in reference to interior design or web design, the way a visual element is structured and organized can itself have a tremendous effect on how individuals respond to it. Oftentimes, people aren’t even completely aware of why they react a certain way to something. Rather, the subconscious affects how they feel about what they’re seeing.

Design is far more detail-oriented than many people may realize, and devising the most effective way to maintain a particular message or tone in one’s web design is a real skill often honed over an extended period. As such, many designers focus largely on fundamentals to provide a framework within which they can be creative. One of the most popular concepts in design is the golden ratio. Let’s discuss it in a bit more detail, including its many practical applications for your SaaS business.

What Is the Golden Ratio?

Whereas some design concepts have been crafted by people within the industry, the golden ratio is actually one that has long existed in the realm of mathematics and beyond. When applied to design, the end result is an organic composition that naturally draws attention to the eye. Because of this benefit, it has since become a mainstay of design. Essentially, the golden ratio is a scenario in which a space is divided into two parts. When the longer part is divided by the smaller part, the result should be equal to the sum of both parts divided by the length of the longer part, both equalling 1.618. Don’t worry about the math behind it all right now.

The point is that the balance across the space achieves a kind of aesthetic beauty to which our brains are predisposed to elicit a positive response. There’s a certain something about the way the space is divided up and sense of tangible harmony that it conveys that is hard to match in design. Notable examples over centuries of cultural significance include the Pyramids in Giza, the Parthenon in Athens, Michelangelo’s The Creation of Adam and the Twitter logo. The golden ratio is so omnipresent that it has become second nature to see it in action, but you can easily harness it for the purposes of your site’s design.

How to Use It

As we’ve mentioned, the golden ratio is everywhere, but you might be wondering how you can use it for your design. Here are a few examples of how it can be incorporated into your site. 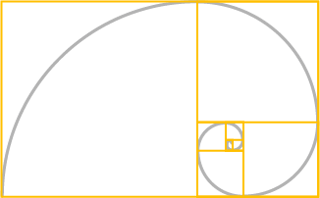 Now that we’ve established why the golden ratio in design is so key to connecting with customers, we hope that you’ve discovered how you can adjust your content to propel your own SaaS business forward. Surely, the points we’ve discussed above can at least provide a brief knowledge of the basics involved in the golden ratio and a better understanding of all the ways it affects your site’s design.

Great design should be constantly evolving, and we’re confident that incorporating the golden ratio more intrinsically into your site will only strengthen your ability to engage customers and, ultimately, drive revenue. No matter how top-notch your product is, your first objective is to get customers to take notice. That’s precisely why design is such a pivotal step in the process, and the golden ratio is one of the most powerful tools to take it to the next level.