Know Thy Customer: The Difference Between a Startup that Sinks or Swims

Know Thy Customer: The Difference Between a Startup that Sinks or Swims 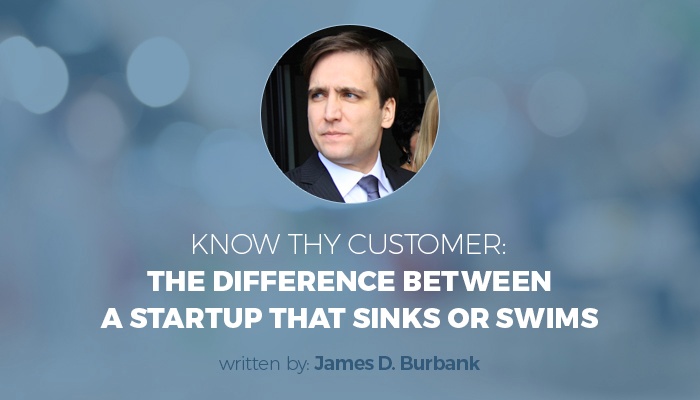 The word "crucial" gets thrown around a lot. Scratch that. The word "crucial", together with all of its approximate synonyms such as decisive, essential, imperative, vital or pivotal, is experiencing an overuse of staggering levels. Nowhere is this more noticeable than in business articles where every little thing, no matter how miniscule, can be (and is) described as crucial depending on what the writer needs.

Because of this, there is a certain risk in calling even the truly crucial things crucial, such as the importance of proper and correct identification of one's customer base for startups.

That being said, we believe that crucial is the perfect adjective to describe how important it is for startups to know their customers. Not just think or believe that they know them. Really know them.

The Fickle Nature of Startups

In case you have not founded, worked for, advised, partnered with or had any other type of professional relationship with a startup, you might not be fully aware of how fragile these businesses can be. According to one of the largest studies of startup failure rates, done by Statistic Brain, 25% of all startups fail in their first year. The percentage grows to 50% by year four and from there on, the percentage gets higher by 5% with each year that passes.

The failure rates differ from industry to industry (with the IT industry being the riskiest) and the reasons for failures are many. However, besides not understanding some of the more "technical" aspects of what makes a successful business (or an unsuccessful one), startups most commonly fail because they do not know their customers.

The Philosophy of Startups

The vast majority of startups are based on an idea which is believed to have its place at a certain moment in time.

The most important group of people, however, are the potential customers who will need to like this idea enough to spend their hard earned money on it, regardless of whether it is a service, a product or something else.

The Inturact blog features a few fantastic articles on building buyer personas for SaaS marketing needs, such as this one and this one. When we are talking about building a startup's idea-adopter, the basics are pretty much the same.

The basic factors will once again be their demographic and psychographic information, as well as certain personal categories. Of course, startup owners will also want to try and predict the motivations and the needs of their potential idea-adopters.

The best way to learn more about this initial persona-building is to check out the two existing articles from above.

Startups will, however, need to take things a few steps further which can have both beneficial and detrimental effects on their future success.

The advantage they have is that their idea-adopter personas can be used to direct their service/product development, as well as a whole string of other decisions, such as the pricing model, customer engagement strategies, marketing efforts and so on.

Of course, all of this also complicates things exponentially and makes it excruciatingly difficult for startup founders and future startup founders to really do everything the right way. And in the startup climate, this can lead to dire consequences.

To best illustrate all the areas where startups can go wrong in determining their customer base, we will share a few real-life examples with you. Of course, the names will be omitted for decency's sake.

For instance, one startup wanted to provide doctors with increased efficiency in their practice. They had to shut their door because doctors are almost exclusively interested in getting more patients, not in running their practice a tad more effectively.

Another startup wanted to be on the forefront of datacenter technologies and they made a mistake of moving too quickly for their customers, coming out with tech that was a few years ahead of their customers.

You can find many more examples here.

Knowing one's (potential) customer is both a science and an art and it can be both time- and nerve-consuming. However, when startups are in question, failing to do this to the best of one's abilities is very much like spilling one's entire water supply before even setting across the desert.

AUTHOR: James D. Burbank is the editor-in-chief at BizzMarkBlog. In his (many) years in the trade show industry, he has seen too many startups fail because of poor customer predictions (among other reasons). He is also a huge Utah Jazz fan.