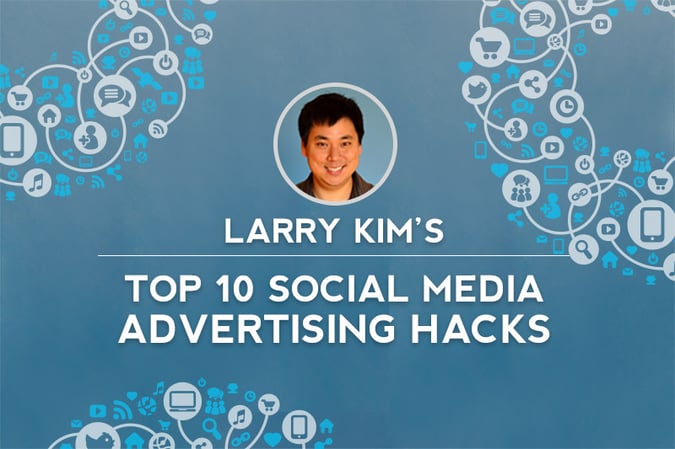 The sessions are filling up quickly at Inbound 2015 and if you don’t get to a room swiftly, you have a good chance of being turned away. Especially for a session with an internet marketing guru like Larry Kim. In a packed house of the lucky couple hundred that made it through, Larry shared his top 10 social media advertising hacks of all time.

Wordstream is the leading provider of pay per click solutions for businesses of all sizes. With over $500 million in paid ads under their umbrella of clients, founder Larry Kim has a lot of experience to share in the world of paid advertising.

Larry also let us know that his was one of the only sessions at the entire Inbound conferences on paid advertising, indicating that inbounders are still a little hesitant to jump on the paid wagon. He’s even heard people go so far to say that, “You should never pay for parking, clicks, or sex because with a little bit of effort and creativity, you can get it for free.”

Well he agrees with this sentiment in theory, being in the paid online advertising business, he shared that by allocating micro-budgets to smartly amplify your social campaigns you can:

Why Do Social Media Advertising

That being said, Larry shared a few reasons to do paid social ads in the first place:

He says that all of these are leading to mediocre performance, but he wants us all to be great, successful “unicorns.” Larry proposes that the solution to all of these problems is paid social advertising.

“You can be a unicorn among a sea of donkeys with paid social advertising.”

Both Facebook and Twitter offer a plethora of paid social options which were the focus of Larry’s talk today.

Quality score is a concept that was invented for Google’s Adwords platform. When a user executes a search, Google has to decide in real time which ads to show, in what order, and how much to charge the advertiser when a user clicks.

Advertisers that create relevant ads are rewarded with better placement and discounted prices, while irrelevant ads have worse placements and more expensive prices. The same is true for Facebook and Twitter.

Larry suggests achieving these high-quality scores by tweeting more often organically and only promoting the top one or two percent of your posts (the unicorns). Never put money toward the losing ads.

You should instead set a minimum threshold of engagement. Wordstream doesn’t pay to promote anything with an engagement rate of less than 15 percent. The best performers can be found by looking in your social analytics within Facebook or Twitter.

Larry takes this a step further by suggesting a “pyramid scheme” of posting that you won’t end up with jail time for trying. He says to post 20 to 30 times per day and promote only the posts that do well. This is truly a data-driven way to drive social media.

Larry says that the difference between paid social ads and organic social media marketing is that you have to be PICKY in paid social. Whereas you have room to experiment more in the organic space. In paid social, you should cast a narrow and specific net in order to maximize your engagement rates.

There are a couple of ways that Larry says this can be done:

Facebook and Twitter allow you to target past purchase behavior. You can target people who’ve already spent money on products that are related to your own. Twitter even knows when you’ve bought coffee by matching your phone number and email address to get your credit card purchase history.

There are 2500 categories of demographic targeting options so that you can drill down deeply to your target market. You can target everything from a persons fitness interest, to the foods that they like, to their relationship status. People share their personal lives on Facebook and the data is there for marketers to take advantage of.

Remarketing is the process of tagging people that visit your website and reminding them to finish what they started after they leave. It just takes a few minutes to set up remarketing audiences in Twitter and Facebook. Larry says that, on average, remarketing triples the engagement rates and doubles conversion rates of whatever you are trying to promote. Use this tactic to push for end of the buyer journey offers, such as sign-ups, consultations, or downloads.

Larry says it’s even possible to take remarketing a step further by combining it with demographic data, behavioral targeting, and indicators of high content engagement.

Larry feels this is the biggest step forward in paid ads in the last decade. Twitter and Facebook allow you to target ads based on specific phone numbers, emails, or other individualized information that you have on hand. In other words, you can upload a customer or prospect email list target the actual social media accounts of those users. It’s a lot like email marketing, but Larry says it’s actually more effective because you limit the potential of people unsubscribing.

Larry shared a story about a blog post that he wrote, which he promoted for $50 to a custom list of influencers and journalists. Within two hours the story was picked up by Marketing Land. And 500 other press outlets had picked it up within 48 hours! Larry explained that this form of paid social ads can be used to replace email outreach and public relations because it’s much more scalable.

Call buttons allow you to convert leads directly from social posts by having click to call options directly on your ads. Call buttons on Facebook ads give users the option to click on your ad and call directly. This takes them from pay per click to pay per lead, which is much more valuable.

Larry purposes that user engagement snowballs as you go because ad formats have the possibility of people following your brand page. In this way, social ads generate fans, which will lead to a larger audience for your product.

1. Get free clicks from paid ads

Larry’s final tip is that you get expanded organic reach by paying for ads. You are only paying for the ad placements, so if someone retweets you and their friends see it or engages, that is an organic interaction. In other words, you buy one retweet or like and get three clicks for free!

Get more details about Larry’s top paid social hacks, check out the detailed post on Wordstream’s blog and slides from Inbound here.