The 4 Types of Churn, and Why Cancellation Isn’t One of Them

The 4 Types of Churn, and Why Cancellation Isn’t One of Them 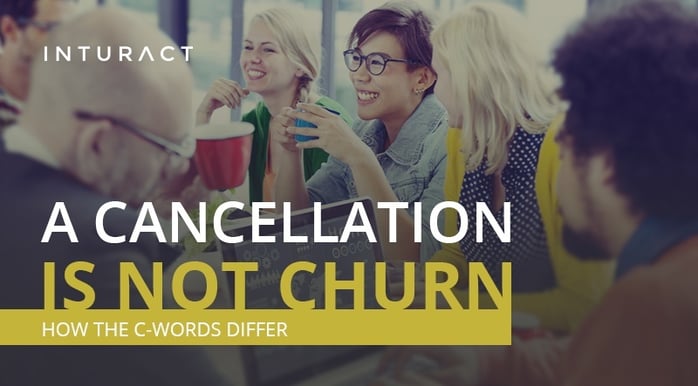 This is an updated version of the original post that was published November 2015.

Churn is what you don’t want. It’s customers leaving you. Saying yes, then saying “Ah, changed my mind.” It’s the breakup we don’t see coming (if only we’d seen the signs sooner!), and it not only hurts our egos, it hurts our businesses.

But simply saying “churn is when customers leave” oversimplifies the situation. If we examine the timing and causes of churn, we can come up with solutions that can stop churn in its tracks (and even reverse it).

The 4 Flavors of Churn

Two men have given a lot of thought to how and why churn happens, and have each come to the same conclusion: There are 4 main reasons people fail to renew, and none of them have anything to do with your company, product or service.

Tom Tunguz dissects them this way in Why Everything I Thought I Knew About Churn is Wrong:

I’ve modeled four different types of customer retention curves below, each with the same 3.5% average monthly churn, but with wildly different customer behaviors…

Aaron Ross adds his churn theories to these basic four, and adds another potential reason for churn. He lists his four types of churn as:

Some people simplify all of this into just two types of churn: Involuntary (circumstances entirely outside of their control lead to churn), and voluntary churn (when they actively decide to leave).

Note that not one of these reasons involves not building a certain feature. Most of churn is really due to messaging (are you delivering on what you promised?), customer service (when they reach out, is it a positive experience?), and most importantly, customer success.

Customer success is where you can do some serious damage to those churn rates (in a good way).

Here’s the magic of customer success:

It’s a proactive approach to churn that has designated customer success agents reach out to customers who are in the onboarding stage (ie. a high-risk time) and:

If a customer is successfully achieving their own goals, they are unlikely to churn. Most companies, however, fail to give their customers the kind of support they need, allowing them to drop off the 60-90-day “cliff.”

Of course, customer success doesn’t stop after 90-days. Customer success departments can also be responsible for tracking user behaviors that predict churn (such as not logging in as often), and – once again – proactively chirp in and see what the user needs.

The credit card churn issue is easily reduced, if not remedied, by automating emails to remind people when their credit cards are about to expire, or using a credit card updater service.

Which leaves the B2B “Champion” type of churn. Once again, this is a job for the customer success team, because ensuring you have more than one “champion” at any given client company is a matter of effective outreach. Very often, you’ll have a single contact person, but that’s not the only person using your product or service. Aaron Ross suggests sending tokens of appreciation to people other than your contact, to ensure that, if the contact leaves, your swag pens (and the warm feelings that come with them) remain.

But what do you do when someone deliberately cancels? Isn’t that churn too?

At first glance, “cancellation” and “churn” might seem like essentially the same thing – they’re both about customers leaving, right? Yes. But, while Churn is when customers leave you FOREVER, cancellation can be, well, canceled. Andrew Tate nailed the last-minute cancellation-save strategy in "Why a SaaS customer hasn’t churned when they cancel."

When a customer cancels their account, it doesn’t mean they’re lost and gone forever. Most can be won back. After all, they came to your service because they believed you could do something for them in a way no other company could. They believed they would find success with you. They wanted to love you.

Somehow, you let them down.

But unless you really toasted marshmallows over that burnt bridge, they still want to love you. Which means, if you play your cards right, they’ll be willing to come back.

The special case of cancellations with time left in their subscriptions

Before we get into tracking, tackling and hog-tying a customer who has fled to the next town (I’m just kidding…sort of…), let’s talk about the easiest customers to win back – the ones who haven’t quite left yet. They’ve hit the cancel button, but they still have time left in their subscriptions (45.5% of all churned customers cancel 3 weeks before their subscriptions end), which means they still have access to your service.

With the right inbound marketing approach, you can win them over.

First, flag cancellations separately from churn. You want to know when a customer has one foot out of the door – and when both feet are walking away. It’s not a bad idea to only count cancellations as actual churn once the subscription period has officially ended.

Then, you need to find out whether your cancelled customers are gone-gone, or were frustrated by something fixable. But be careful with your outreach. You don’t want to chase after a customer with a hard-sell after they’ve already rejected you (this happened to me at a Christmas tree lot once, it was very creepy).

When you reach out to your customer, you want to do so with concern.

We’re so sorry to see you go, and we were hoping before you leave that you’d be willing to tell us how we can improve. Would you mind taking this survey? We’d really appreciate your feedback.

You’re not trying to lure them back, you’re trying to improve your company – that’s the line you need to take. Then, when they answer your survey, you have options.

Whatever you do, don’t send a message that sounds like a robot wrote it. Automated is good – it’s all part of a growing business and it’s a vital tool when time is of the essence, but always have that personal touch.

Your cancellation intervention has to be timed very carefully. You only have a short window, but if you begin your campaign to win them back too soon, you won’t succeed either.

When your customer cancels, give them a day or two to cool off. Then contact them with a personal-sounding message and ask why they left (with a brief exit survey that leaves room for an open-ended response).

Customers usually leave for the same few reasons (start a list if you don’t believe me).

If someone is set on leaving, by all means, let the churners churn away. It’ll be better for your company in the long run to do away with sketchy customers so you can focus on keeping your loyal customers blissfully happy (and very successful).

Besides, if you try too hard much to convince cancellations to stay, or prolong the cancellation process, you’ll irritate your departing customers who will then turn to social media to complain about it!

If you would like more information on cancelations and churns and how the terms differ, consider meeting with our team of SaaS experts during a free SaaS business assessment.